Al-Gahiz and his theory of social communication
Dostępność: 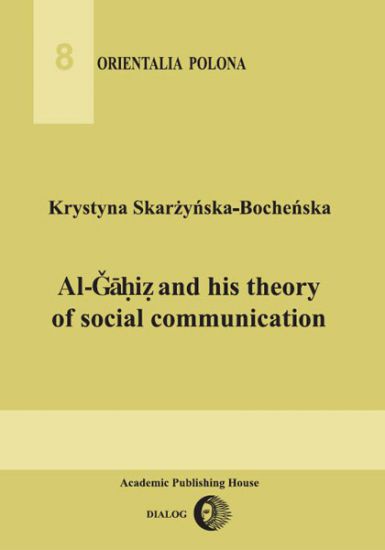 Al-Ğāhiz, an Arabic scientist of the 9th century, belongs to the thinkers whose participation in and contribution to the development of the world science has not been recognized and appreciated. The great erudite and author of numerous works in various areas formulated, among others, the theory of social communication which may be compared to the late 20th century Mikhail Bakhtin’s theory of discourse. The opinions of the Arab intellectual from Basra, living in the Middle Ages, reveal surprising accuracy and lose nothing of their topicality.

Prof. Krystyna Skarżyńska-Bocheńska, the author, tries to give justice to the learned man whose ideas became forgotten or were distorted by careless copyists and have not received the appreciation they deserved. She presents the results of her research into the problem of the “art of words” in Al-Ğāhiz’s considerations, confronting them with the newest establishments of the modern Arabic scientists.
Pliki